Please show your support of Waihekepedia by adding a link to us from your web site. Waihekepedia T Shirts now available at the Ostend Market

From Waihekepedia
Jump to navigation Jump to search

In the Winter of 2008, Fullers Ferries increased its ferry fares for commuters from $300 to $344 a month, in response to rising operating costs and record diesel price increases over the preceding months.

A grass-roots campaign, called Campaign 4 Fair Ferry Fares (C4FFF), was set up, led by Cathy Urquhart, in a lighthearted spirit to highlight the unaffordable increases. 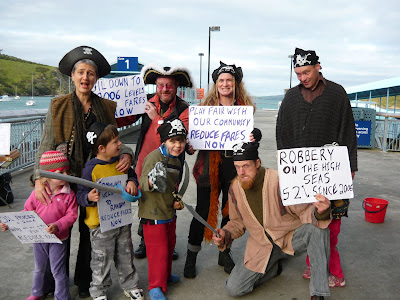 Actions at the wharf terminals and on the boat, such as passengers dressing up as pirates (accusing Fullers of "robbery on the high seas") and carrying a coffin on board to draw attention to the death of social diversity on the island when travel becomes too expensive for low and modest income families to live on Waiheke.

The campaign has had mixed success with monthly fares dropping to $310 (but rising again in February to $315), but has drawn nationwide press and TV coverage to its colourful protest actions.

The campaign has set up a blog, Fullerswatch, to relate public transport experiences and issues on the Hauraki Gulf. C4FFF is concentrating on a variety of other issues too, such as researching the correlation (or, more accurately, lack of) between diesel prices and ferry fares; the administration of the Public Transport Management Act and its submissions process; and the rise in profitability of Fullers due to the SuperGold card subsidies (press release).

To gauge needs and opinions about public transport to and from Waiheke and on the island itself, C4FFF has designed an online public transport survey. It would appreciate if you could fill it in via this link

In July 2009 Shirin Brown, on behalf of C4FFF, made an oral submission to the Select Committee meeting on Waiheke Island looking at the Auckland Council Bill, and fragments of it made the main evening news on TV One: YouTube video